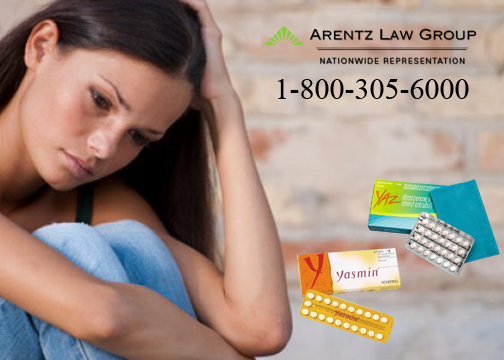 Yaz contains ethinyl estradiol and drospirenone, a hormone that is unique to Yaz, Yasmin, Ocella, Beyaz, and other “fourth-generation” birth control pills.  Drospirenone is a synthetic progestin that raises potassium levels in the body, causing a condition known as hyperkalemia.  Hyperkalemia (elevated potassium in the blood) can cause a host of health problems.  Birth control pills containing drospirenone have been found to dramatically increase a woman’s risk for deep vein thrombosis (DVT), pulmonary embolism, stroke, and sudden death.

Bayer aggressively marketed Yasmin without adequate warnings about serious and potentially fatal Yasmin side effects.  As a result, the Yasmin family of pills are now among the most popular forms of birth control in the United States.  Yasmin problems have been linked to the ingredient drospirenone, a progestin which is not like other progestins available in the United States.  Drospirenone can cause elevated potassium levels in a condition known as hyperkalemia, and this can cause serious heart issues and other health issues.

In 2002, the prominent consumer advocacy group Public Citizen listed Yasmin as a “Do Not Use” drug in April 2002, based on the following reasons:

Multiple studies have shown the potential risk of fatal health problems linked to Yasmin.  Despite the fact that Bayer was undeniably aware of these risks, they continued to market their drug without proper warnings.  They also introduced a new contraceptive, Yaz, which also contains drospirenone and this poses similar risks to Yasmin.

According to a 2014 second-quarter financial report, Bayer Healthcare Pharmaceuticals has resolved thousands of claims alleging adverse side effects of the birth control pills Yaz and Yasmin. The pharmaceutical company has paid out over $1.8 billion in settlements to resolve Yasmin and Yaz lawsuits brought by women who experienced deep vein thrombosis (DVT) and pulmonary embolism.

Bayer failed to sufficiently warn birth control patients and doctors of the increased risk of blood clots when exposed to the Drospirenone in its pills.  Lawsuits have also been filed against Bayer for injuries sustained from generic counterparts of Yasmin and Yaz, marketed under the brand names Gianvi and Ocella.

Why File a Yaz Lawsuit?

As of April 20, 2015, Bayer had reached agreements to settle approximately 9,600 claims in the United States for Venous Clot injuries (Deep Vein Thrombosis or Pulmonary Embolism) for a total amount of about $1.92 billion; an average of $200,000 per settlement.

Women who have suffered from serious Yaz side effects have filed lawsuits in pursuit of compensation for damages such as the cost of medical care, lost wages, and pain and suffering.  These suits filed by Yaz lawyers are based on claims against Bayer Healthcare Pharmaceuticals, Inc. and its subsidiary, Berlex, Inc., alleging that these pharmaceutical manufacturers:

If you or a woman you love has suffered blood clots, serious injury, or death after taking Yaz; consider pursuing compensation for your damages.  Your life has been hugely affected by the side effects of Yaz; pursuing a legal claim is a way for Yaz survivors to take back control.  The drug company put profits before your safety and they should be held accountable.

What is Yaz?
Yaz and Yasmin are relatively new birth control pills made and marketed by Bayer Healthcare Pharmaceuticals.  Yasmin was approved for use in the U.S. by the FDA in 2001, and Yaz in 2006.  Both pills contain the same active ingredients, including drospirenone, which can cause serious and sometimes fatal side effects.
Do other drugs contain drospirenone?
In addition to Yaz and Yasmin, Ocella (a Yasmin generic) also contains drospirenone.  Other drugs that contain this progestin include Gianvi, Loryna, Syeda, Zarah, Beyaz, and Safyral.
What are Yaz and Yasmin side effects?
All birth control pills contain estrogen, which has been linked to a higher risk of developing blood clots.  Other serious Yaz and Yasmin side effects are related to the drosperinone in the drug.  This progestin can cause heart rhythm disturbances, heightened blood potassium known as hyperkalemia, pulmonary embolism, deep vein thrombosis, gallbladder problems, kidney damage, heart attack, and stroke.  Many of these side effects can lead to the wrongful death of a patient.
Who is responsible for Yaz and Yasmin injuries and deaths?
As a pharmaceutical manufacturer, Bayer is legally and morally obligated to provide a product that is safe and to provide adequate warnings about any potential side effects linked to their drugs, Yaz and Yasmin.  In Yaz and Yasmin lawsuits, our lawyers can show that Bayer did not provide adequate warnings about the increased risk of injuries users of their drugs may face.  Specifically, Bayer did not warn that Yaz and Yasmin could be more dangerous than other birth control pills on the market.  Injured patients have also claimed that Bayer over-promoted these drugs for uses like treating PMDD and acne, though they knew that the risks outweighed any proposed benefits from this drug.
Can I afford a Yaz or Yasmin lawyer?
Yes! At Arentz Law Group, P.C., we believe that every patient injured by Yaz or Yasmin deserves just compensation for their physical, financial, and emotional damages.  To that end, we offer free Yaz and Yasmin lawsuit consultations and never charge our clients a penny unless their claims end favorably and they recover compensation.

How to File a Claim

If you are considering seeking a lawyer regarding your Yaz concerns, it’s important to seek a consultation with a lawyer as soon as you possibly can.

The experienced Yaz attorneys of Arentz Law Group understand that getting involved in litigation can be daunting. Our goal is to get you your life back without causing additional financial or emotional stress. We never require any upfront fees and strive to help you receive your settlement with as little time and effort as possible on your end. Simply contact our office anytime, day or night, by calling 1-800-305-6000 or by completing the form below for a free legal consultation.  Once approved, we will send you the necessary record release forms that will allow us to order your medical records and file your claim.  The Yaz lawyers at our firm are highly experienced in this type of litigation, and can stand by you until you recover the full compensation to which you are entitled.