Arentz Law National Injury Lawyers are currently investigating claims that the DePuy Synthes Attune Knee Systems is prone to early failure. This early failure for many has resulted in the need for revision surgery. If you or someone you love has experienced pain or discomfort after receiving the knee replacement, you may be entitled to compensation. You don’t pay unless we recover compensation for you. Call Arentz Law National Injury Lawyers today to speak with an experienced knee replacement lawsuit attorney. 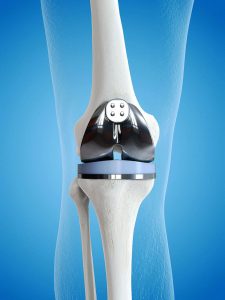 In plenty of cases, the only way to relieve patients who experience these symptoms is to undergo revision surgery. Revision surgery is the painful process of replacing the defective DePuy Knee Replacement with a new one.

Shortly after the DePuy Attune Knee Replacement was approved by the FDA, they began receiving complaints. All of these many complaints culminated in a 2017 study published in the Journal of Knee Surgery. In this study, nine orthopedic surgeons claim they had discovered a “high rate of debonding of tibial implant-cement interface” in the DePuy knee replacement system, which potentially caused significant instability in patients.

Simply, this means that the orthopedic surgeons discovered that the glue is being used to bind the Attune Knee System is faulty. The glue may not adequately hold the device together or it deteriorated prematurely. As a result of the faulty glue, the Attune Knee System may loosen and destabilize the knee replacement from the tibia.

Reports submitted to the FDA’s Manufacturer and User Facility Device Experience (MAUDE) database were reviewed by surgeons to reveal that 232 of the reports involve the DePuy attune knee replacement. In addition to the MAUDE report, authors of the 2017 study discovered that three separate hospital databases reported 15 cases of patients with tibial loosening leading to revision surgery.

According to the American Academy of Orthopaedic Surgeons and the Agency for Healthcare Research and Quality, the average lifespan of knee replacements is 15 years. Unfortunately, the 2017 study found that patients were experiencing complications from knee replacements within two years.

Can you file a DePuy Attune Knee Replacement Lawsuit?

According to drugwatch.com, more than 600,000 people in the U.S. undergo a partial or total knee operation each year, and that number is expected to grow to 3.48 million by 2030.

If you have undergone surgery for a DePuy Attune Knee replacement and you experience any of the following symptoms contact our firm today. For a no-obligation consultation contact Arentz Law today.

The DePuy Knee Replacement system is marketed as a safe and reliable knee replacement, unfortunately, many patients have not had the luxury of that experience. DePuy has a responsibility to warn their patients of all the potential side effects associated with a knee replacement; no matter how rare those side effects are.  When they don’t warn the public, then innocent people are harmed.

If you have had a DePuy Attune Knee Replacement and you have suffered side effects leading to revision surgery, you may be eligible to file a lawsuit. Your lawsuit will not only help you pay for medical expenses. It will raise awareness that Knee Replacements are not safe to be used. To get started call Arentz Law National Injury Lawyers at 1-800-305-6000, or fill out the contact form on this page.