Firefoam lawsuit lawyers at Arentz Law National Injury Lawyers are standing by ready to assist firefighters who may have been affected by fire fighting foam. For decades firefighters have used firefoam because of its effectiveness in fighting jet fuel and petroleum fires. Although effective, this foam contains dangerous chemicals that have been linked to cancer. These harmful chemicals can stay in the body for years due to the highly durable nature of the fire-fighting foam. If you believe that you have suffered as a result, contact a Lawyer at Arentz Law to learn about the Firefoam lawsuit compensation and victims’ rights in a free legal consultation today. 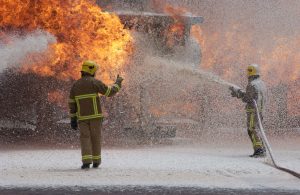 What is Fire Fighting foam?

Aqueous film-forming foam (AFFF) or more commonly known as fire fighting foam has been used since the 1970’s for fighting jet fuel and petroleum fires. Firefoam works by creating a blanket over the flames that cuts off fuel from the oxygen it needs in order to burn. To help smother the flames chemicals known as Perfluoroalkyl and polyfluoroalkyl substances (PFAS) are used in firefoam. According to the EPA, certain PFAS have been classified as “Emerging Contaminants.” In other words, PFAS are likely dangerous to your health. Along with the findings of the EPA the American Cancer Society has linked possible cancers in firefighters to PFAS.

Cancers Associated with PFAS Include:

Firefighters who have worked as airport or military firefighters are at a much higher risk of PFAS exposure. As recent as 2018 it was a Federal Airport Administration (FAA) requirement to use fire fighting foam containing PFAS following U.S. Navy Guidelines.

Many Branches of the military have used fire fighting foam containing PFAS since the 1960s. It has been used so regularly that it was common to be used even during training exercises and non-critical missions. It was so coveted by the military because of its ability to put out jet fuel fires. All Military Branches are currently phasing out the use of firefoam containing PFAS.

Why File a Firefoam Lawsuit

Companies that have produced or used firefoam for years including 3M and Dupont as well as the DoD are now coming under legal and medical scrutiny. According to reports, there has been knowledge of the risks associated with fire fighting foam without action. If you believe that you may be suffering from cancer caused by fire fighting foam you can take legal action and seek compensation from these companies today.

If you have been diagnosed with cancer that could be linked to firefoam, you could be entitled to pursue substantial compensation for your financial, physical, and emotional damages in a Firefoam lawsuit.  A lawyer from our firm can help you recover the full compensation to which you are entitled.  Contact us today to speak with an attorney in a free legal consultation.