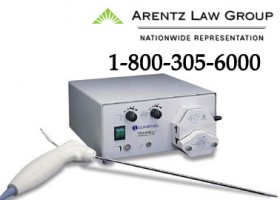 While the majority of the uterine fibroids are non-cancerous, there is still a risk to women who are having a hysterectomy performed with a morcellator.  It is estimated that 1 in 350 women have leiomyosarcomas in their uterus that have not shown any signs of cancerous growth.  In essence, they are lying dormant.  When the uterus is removed with a morcellator, the fibroids are chopped and the cancerous cells can be spread.  The result is that the sarcoma is “activated” and begins to spread quite rapidly.  Women who were never diagnosed with cancer have found themselves with an advanced stage cancer after having a hysterectomy performed with a morcellator.

What Are Fibroids?
Fibroids are small, non-cancerous tumors that grow in or near a woman’s uterus.  The uterine muscles grow and often become abnormally shaped.  These abnormal bulges and lumps are known as fibroids.  Nearly all women get them after they reach age 30; and often the fibroids will shrink or diminish in size when the woman reaches menopause.  Sometimes when the fibroids become enlarged, or develop in a more sensitive area of the uterus that they become uncomfortable for the individual.  When this happens they are often removed.
How Do Fibroids Form?

The exact development of fibroids is unknown.  Proteins that accumulate, muscle response to injury, and the blood system all play a role in how the fibroids develop.  Genetics plays a huge role in the development of uterine fibroids.  This include race; women of African descent are much more likely to develop fibroids than women of other races.  Women who have been pregnant are less likely to develop them, and women who have their first menstrual cycle later in life are also less likely.  Alcohol intake (especially beer), infections, and high blood pressure all increase the likelihood of fibroid development.

There are two primary methods for the treatment for fibroids.  If they are small, and are not currently bothering the individual, medication can help to reduce their size and help alleviate some of the discomfort associated with them.  These medications help to reduce the production of estrogen in the ovaries, and over a 3 to 6 month period the patient can experience a 50% reduction in fibroid size.  With this treatment, however, come the side effects associated with lower estrogen including: hot flashes, osteoporosis, and sleep disturbance.

The alternative to medication is a surgical treatment for fibroids.  This procedure is often a hysterectomy (complete removal of the uterus), or a myomectomy (removal of fibroids), depending on the size, location, and number of tumors.  While an open abdomen procedure is still the most common, many women are opting to have a less invasive surgery done with a morcellator.  This less invasive procedure may allow for a faster recovery time and few scars, but it may also cause undetected cancerous cells to be spread like seeds around the uterus or abdomen region.  Once spread the cancer progresses aggressively and rapidly causing a sharp decline in the woman’s overall health.

A sarcoma is a type of cancerous tumor that grows in a ball-like mass.

Soft Tissue Sarcomas generally develop in the legs, arms or abdomen.  In these areas the normal muscle or fat cells play host to the cancerous growths.

Myosarcoma is a sarcoma that forms on the muscle mass, specifically along smooth muscles.

Leiomyosarcoma is a sarcoma tumor that forms on the smooth muscles of the uterus.  This type of cancer is relatively rare, yet has a very high mortality rate.  One reason is that it is hard to detect.

Sarcomas are not a common form of a cancerous tumor.  Sarcomas originate from the mesodermal cells, whereas a carcinoma originates from the epithelial cells.  Sarcomas grow as a mass, or what is commonly thought of as a tumor, and push everything else out of the way.  Carcinomas, on the other hand, spread and infiltrate their way through other areas of the body.  Both types of cancer are just as dangerous; their cellular origin does not make one worse than the other.

Depending on where the sarcoma is, and what type of tissue it grows on, determines its name.  For instance, leiomyomas are the benign tumors that grow in the uterus; they are commonly called uterine fibroids.  When these fibroids become cancerous, then they are called leiomyosarcomas.

Leiomyosarcoma
Leiomyosarcomas usually manifest themselves in the form of fibroids, small tumors that form on the uterine walls, and are generally benign and aside from potential discomfort are mostly harmless.  However, sometimes when the cells are disturbed, they become cancerous.

When the fibroids are removed, or when the entire uterus itself is removed, with the help of a morcellator, the cells are disturbed.  Morcellators essentially grind up the tissue, and pull it through a tube and out a small incision.  It is minimally invasive, and the patient experiences less discomfort and a faster recovery.  However, during the grinding process, pieces of the cancerous growth can be flung around the uterus and pelvic region.  This is similar to casting seeds; the cancerous cells are now spread throughout the area.  When the cancer cells are disturbed like this, they become very aggressive, spreading rapidly throughout the remaining area.

The common procedure will likely cause an advanced stage of cancer that will take the patient’s life.

Symptoms of uterine cancer include:

Abnormal Bleeding – While menstruating all women bleed.  Normally the cycles are fairly consistent, last the similar periods of time, and discharge about the same amount of blood.  When the cycle is off, or bleeding occurs randomly between menstrual periods, this can be one of the symptoms of uterine cancer.

Painful Urination or Sex – Neither of these acts should include any form of pain.  If that happens, then something is wrong, and the patient should consult her doctor.  There is a chance that it is a different problem other than uterine cancer, but it should always be checked out.

Pelvic Pains – Often abnormal pelvic pains are caused by external forces, bacteria, or a number of other items.  If they persist more than a day or two, then it is time to get looked at to determine the cause of the pain.

The cause of this form of cancer is unknown.  There are some factors that contribute to a female being more likely to develop it, such as obesity, menopause, and smoking, but there is no real way to prevent the cancer.  What a patient can do, however, is prevent it from spreading to a more advanced stage.

Early detection is the only way to do so.  With regularly exams and checkups a female can have her doctor find the cancer when it is in the early stages and easy to treat.  Knowing the signs and symptoms of uterine cancer is the other way to prevent it from spreading.

The most common way to treat the cancer is via a hysterectomy.  This procedure removes the uterus and ideally all cancerous cells along with it.  If the cancer is detected soon enough, this is easily done. However, many women choose to have their procedure done with a power morcellator. This device allows the surgeon to make a much smaller incision (helping speed recovery); however, it also grinds up the offending tissues.  This grinding process can cause the tissue to be spread around the area, and if the cancer cells are also spread, it can rapidly advance the cancer rather than remove it.

There are several different ways a person can go about having these procedures done.  All get the job done, the difference is how invasive the surgery is, and which tools are used.

Abdominal Surgery – Traditionally the surgeon will make a 5 to 7 inch incision on the patient’s abdomen.  He then goes in and remove the tissue as needed.  For years this has been the only way to perform the surgery, and it still accounts for roughly 65% of all the procedures performed.  This surgery is the most invasive and has the most painful recovery period.

Laparoscopic Surgery – Although the technology has been around for quite some time, many people are slow to adapt to laparoscopic surgery.  This procedure involves a small incision in the abdomen or in the navel.  The tools are then inserted through this incision, and the work is done without opening the person up.  Some surgeons use two incisions, one for the tools and one for the camera.  This surgery has a much shorter recovery period.

Vaginal Hysterectomy – Another method of accessing the uterus is through the vagina.  This method incorporates many of the laparoscopic methods, yet instead of going through the abdomen or navel, the doctor enters through the vagina.  A small incision is still needed; however there are no external scars.  Recovery time for this procedure is about the same as the aforementioned procedure.

While the laparoscopic methods are much preferred due to their shortened recovery period, and their reduced discomfort to the patient, they often use a morcellator to remove the tissue.  This device, which consists of blades on the end of a hollow tube, cuts up the tissue and then extracts it through the tube.  In the process some of the tissue is spread throughout the uterus or abdomen region.  This can lead to spreading of cancer cells, aggravating them, and causing a rapid spread of cancer that was once contained to a small location.

The recovery time for the hysterectomy depends on how the procedure is performed, and if it was a total uterus removal, or partial.

A laparoscopic hysterectomy recovery time, on the other hand, is greatly reduced.  With less healing involved due to a smaller incision, many patients spend just one night in the hospital, and are back to normal within a two week period.  That normal, however, may not last.

Dangers of Hysterectomies
The hysterectomy recovery time with a laparoscopic surgery is appealing; however, many women have their uterus removed with a morcellation device.  This device can speed up the process, but in the end may cause the patient to have cancerous cells spread around the abdomen region.  The patient will have nearly immediate relief from the pain and discomfort, but as the cancer grows; bigger problems arise.  The rapid onset and the advanced stage of cancer spread by power morcellation make this new cancer hard to treat.
Send Us a Text Message!
(877) 656-2827