FDA Approval and Warnings for Xarelto 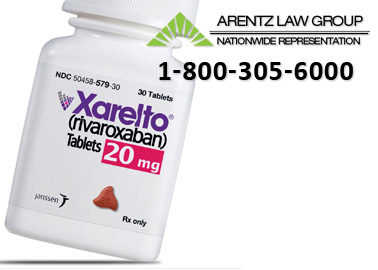 Xarelto is a popular anticoagulant (blood thinner) used by many people who have recently undergone a knee or hip surgery.  These surgeries can often lead to deep vein thrombosis (blood clots in the legs).  To avoid these potentially fatal blood clots, Xarelto is used to thin the blood.  The drug has not been on the market for long, but it is already facing several lawsuits regarding internal bleeding.  If you, or someone you love, have used Xarelto and you have suffered from hemorrhaging, you may be entitled to compensation.  Schedule your free initial case review with a Xarelto attorney from Arentz Law today by calling 1-800-305-6000, or by filling out the contact form on this page.

In 2008 the drug company Bayer began petitioning the FDA to approve their new blood thinner medication Xarelto.  Over the next 3 years the company went through a series of tests, and submissions to the FDA.  The FDA found that Xarelto was substantially different than competitors Pradaxa and Coumadin.  In July 2011 the FDA granted approval.  Bayer teamed up with Janssen Pharmaceuticals to market the drug in the US.

Along with the approval the FDA received some feedback on various side effects.  While most were disclosed on the label there are some reports of patients suffering from thrombocytopenia.  This condition is when the sufferer experiences abnormally low levels of platelets.  Platelets are what help the blood to clot.  The report is still being investigated by the FDA.

In November 2011 Janssen and Bayer petitioned the FDA to run an ad claiming that Xarelto was superior to competitor Coumadin.  This ad was based on a study that showed it was easier to determine dosage with Xarelto (Coumadin or warfarin is hard to determine the proper dosage), however the study failed to show that the drug was actually superior.  The petition was denied.

In June 2013 the FDA sent a warning letter to the marketing offices of Johnson & Johnson.  The letter explained that recent print ads regarding Xarelto were misleading and failed to address all of the potential side effects of the drug.  The ads claimed that the drug was much safer than it really was.

In 2014 the FDA required a new warning label on the box for Xarelto regarding bleeding if the patient undergoes an epidural while taking the drug.  This warning label indicated that there is a risk of neurological impairment and the patient must be monitored carefully.

The FDA is still investigating claims that Xarelto has caused internal bleeding, or hemorrhaging, in some patients.  There is currently no warning that abdominal, brain, or other hemorrhages may occur.  However, there are many patients who experience these potentially fatal side effects; they end up being hospitalized.

If you have taken Xarelto and you have experienced hemorrhaging or another severe side effect, you may be entitled to compensation to cover medical expenses and other damages.  Schedule your free case review with a Xarelto attorney with Arentz Law by calling 1-800-305-6000, or by filling out the contact form on this page.

Attorneys with Arentz Law can represent clients form all 50 states.