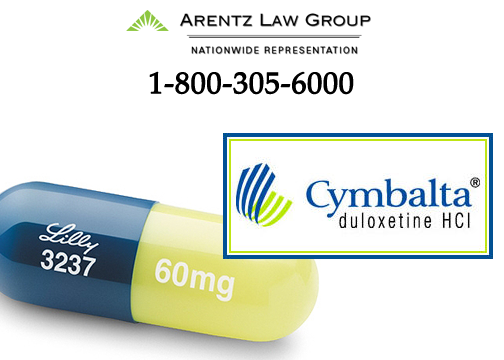 Cymbalta lawyers at Arentz Law Group, P.C. can help victims of Cymbalta side effects pursue just compensation for their damages in dangerous drug lawsuits.  A popular antidepressant, Cymbalta has been linked to an increased risk of suicidal thoughts and behaviors, severe withdrawal symptoms, and potentially fatal liver damage.  If you or someone you love has suffered as a result of Cymbalta side effects, you could be entitled to substantial compensation.  We encourage you to contact us to schedule a free evaluation of your claim with an experienced Cymbalta attorney.

Cymbalta (duloxetine) is made by Eli Lilly & Co., and it was approved by the FDA to treat depression in 2004.  Cymbalta belongs to the SNRI (serotonin-norepinephrine reuptake inhibitor) class of medications, which inhibit neurotransmitters and hormones in the brain that affect emotions, mood, and pain.  Cymbalta is also an analgesic, and is sometimes used to help patients manage pain or discomfort associated with fibromyalgia, diabetic peripheral neuropathic pain, and chronic musculoskeletal pain.

The FDA required that a “Black Box Warning” be added to the labels of all antidepressants to caution users about a potential for a heightened risk of suicidal thoughts and behavior in teens and children shortly after Cymbalta was released.

In 2004, the family of a 16-year-old boy filed a Cymbalta lawsuit against Eli Lilly for their failure to warn of suicide side effects linked to their drug.  This suit was filed before the “Black Box” warning was added to Cymbalta’s labels, and the boy’s doctor was not aware of suicides documented during Cymbalta clinical trials.  In August 2012, the Eighth Circuit Court of Appeals ruled that this lawsuit could proceed based on evidence that Eli Lilly failed to disclose the fact that five suicides occurred during Cymbalta clinical trials.

Before Cymbalta was approved by the FDA, Eli Lilly & Co. conducted a study to evaluate potential Cymbalta withdrawal problems.  Patients in the study were given Cymbalta for 8-9 weeks, then abruptly switched to a placebo.  According to a report of this study released by the Institute for Safe Medicine Practices (ISMP), up to 50% of the patients monitored in this study experienced withdrawal after stopping Cymbalta use, and 10% of those patients suffered “severe” withdrawal symptoms.  In more than one-half of the patients studied, symptoms did not resolve within 2 weeks of cessation of Cymbalta.  No details were released regarding what these symptoms were, how severe they could be, or how the risk of Cymbalta withdrawal may be minimized.  However, a number of patients who have discontinued use of Cymbalta have reported the following Cymbalta withdrawal symptoms:

Some patients who use Cymbalta have reported liver problems, including hepatitis and cholestatic jaundice.  Patients who already have liver problems or who have substantial alcohol use are cautioned to be aware of the symptoms of possible Cymbalta liver side effects, which may include:

If you or someone you care about suffered as a result of Cymbalta side effects, our dangerous drug lawyers can evaluate your claim at no charge to determine whether you may be entitled to compensation for your physical, emotional, and financial damages.  To learn more about victims’ rights in Cymbalta lawsuits, contact us today.