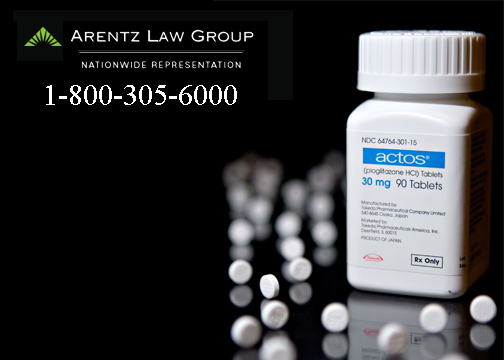 Actos bladder cancer lawyers from Arentz Law Group, P.C. are working with individuals across the United States who have suffered serious injury or the loss of a loved one as a result of Actos side effects.  Actos (pioglitazone) is made by Takeda Pharmaceuticals and was approved as a treatment for type 2 diabetes by the FDA in 1999.  In recent years, a link has been drawn between use of Actos and a heightened risk of a bladder cancer diagnosis.  If you believe your bladder cancer may be connected with use of the diabetes drug Actos, you could be entitled to substantial compensation for your damages in a dangerous drug lawsuit.  For a free legal review of the circumstances surrounding your diagnosis, contact an experienced Actos lawyer today.

Actos Bladder Cancer and Other Side Effects

In September 2010, the FDA cited evidence from an ongoing study conducted by Takeda Pharmaceuticals as an impetus for an in-depth investigation into a possible link between Actos and bladder cancer.  Based on information gathered from this study and other independent research, the FDA required Actos labels to be changed in June 2010 to reflect an increased risk of bladder cancer for patients who use this widely prescribed diabetes drug.  The FDA also mandated that Actos warning labels disclose that the risk of developing Actos bladder cancer increases if a patient uses the drug for more than one year.  Similar drugs, including Actoplus, Duetact, and ActoplusMet RX also feature these warnings.

In 2011, Italian researchers conducted another investigation into Actos side effects, gathering statistics from FDA Adverse Event Reporting System records.  These researchers also drew a correlation between long-term use of Actos and bladder cancer side effects.  In light of the conclusions drawn by this study in conjunction with other studies, France and Germany issued full Actos recalls in June 2011.  Though an Actos recall has not yet been issued in the United States or Canada, these countries continue to research the link between Actos and bladder cancer.

Bladder cancer is not the only potentially fatal Actos side effect to attract attention from the FDA.  In 2007, the regulatory agency mandated a “black box” warning label for Actos, cautioning Actos users about a potentially higher risk for congestive heart failure.  Liver failure and serious bone fractures have also been noted as possible Actos side effects.

Multiple individuals who have suffered as a result of Actos bladder cancer have opted to file pharmaceutical product liability lawsuits.  In Actos bladder cancer lawsuits, victims may recover compensation for physical, emotional, and financial damages, including but not limited to medical bills, lost wages, and pain and suffering.  If you believe your bladder cancer may be the result of taking Actos to treat your diabetes, we encourage you to contact us to schedule a free legal consultation with an experienced and respected Actos lawyer.