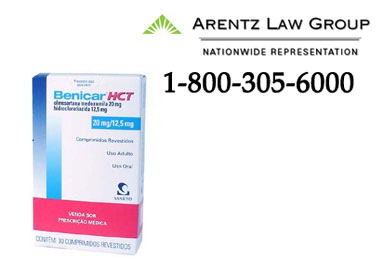 In 2002 the Tokyo based company Daiichi Sankyo found FDA approval for their drug to treat high blood pressure.  Benicar hit the market and surged to popularity.  Despite the fact that millions of people have taken this drug, it remains that there are some serious side effects that were never properly addressed.  Taking Benicar has caused some patients to experience severe gastrointestinal problems, such as chronic diarrhea leading to dramatic weight loss, that are misdiagnosed as celiac disease.  If you, or someone you love, have taken Benicar and suffered from these side effects, you may be entitled to compensation.  Call 1-800-305-6000 or fill out the contact form on this page to schedule your free initial consultation with a Benicar attorney at Arentz Law Group P.C.

After its US debut in 2002, Benicar saw a rapid rise to popularity.  The drug worked well, and the side effects were often just inconveniences.    The drug, which currently costs around $80 for a one month supply, is still protected with a patent.  This means there is no generic available, and the manufacturer can still reap the huge profits associated with sales.

Those huge profits are some of the largest in the industry.  The year 2012 saw US sales of Benicar topping $727 million.  Those profits continued to grow to $807 million in 2013 despite the report that came out that showed a link between taking Benicar and developing spruelike enteropathy.  It was not until July 2013 that the FDA updated the warning requirements to include a warning about the risk of developing intestinal problems.

The manufacturing company Daiichi Sankyo is profiting tremendously from these sales as well.  With a market cap of nearly $12.5 billion this global company sees profits from around world.  The revenues brought by the sale of Benicar only help add to this massive corporation’s bottom line.

But those sales come at quite the price to many people taking the drug.  A study published by the Mayo Clinic in 2012 showed that taking Benicar may cause gastrointestinal problems, and those problems may be misdiagnosed as celiac disease.  The outcome is that patients do not respond to a gluten free diet, have chronic diarrhea and severe weight loss.  In the study that looked at 22 people, one patient lost 125 pounds before it was discovered that Benicar was the culprit and not another malady.

The Benicar attorneys with Arentz Law believe that Daiichi Sankyo should be held responsible for the risk they put on their customers.  If you, or someone you love, have taken Benicar and you have been misdiagnosed with celiac disease (or if you have suffered from gastrointestinal problems including spruelike enteropathy), you may be entitled to compensation.  Contact an attorney with Arentz Law by filling out the form on this page or by calling 1-800-305-6000 to schedule your free initial consultation.

Attorneys with Arentz Law can handle cases from clients who reside in all 50 states.