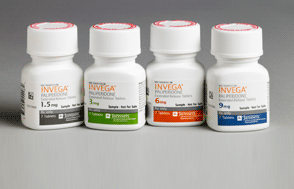 You may remember the case of Aaron Banks, the young man who suffered from growing breasts after taking the antipsychotic drug Risperdal.  The drug Invega is not much different than Risperdal.

Invega found FDA approval in 2006, right around the time that the patent was running out on Risperdal.  The drug is a minor variant of its parent.  Invega is considered to be a metabolite of Risperdal.  What this means is that as Risperdal breaks down in the body, one of the active ingredients that is created by the body is Invega.  By separating this from the parent drug, Johnson & Johnson created a new drug that has a very similar effect on the body.

Invega is Approved to Treat Schizophrenia

Nearly all drugs out there have treatments for which they are approved.  And nearly all drugs are prescribed to people to help with conditions that have not been approved.  This is called “off-label” use.  Doctors have found that when a child takes Invega, it can help calm their thinking processes if they have a mental illness like ADD/ADHD or bipolar disorder.  This is despite the fact that the drug has not been approved for those conditions.

The doctors are not doing anything wrong by prescribing the drug for a condition that is off-label.  However, the drug companies cannot market their product for those conditions.  So if there is any advertising that says Invega can help treat children with ADD, that is when the companies will get into trouble.

Side Effects of Invega

The problem, however, is that the side effects are similar to Risperdal.  Studies show that taking Invega can cause male teens to suffer from breast growth the same as they would while taking Risperdal.  The process happens in the same way: prolactin levels increase and breasts begin to grow.  Just as the risk of growing breasts was never fully disclosed for Risperdal, it was never fully disclosed for Invega either.

The biggest demographic that suffers from gynecomastia is composed of young men.  At this period in their life their bodies are undergoing rapid hormonal changes, and the sudden increase of prolactin causes them to grow breasts (that must be removed via surgery).  However, young men are not the only ones that suffer.  The older generation is also undergoing hormonal changes (albeit not as extreme).  Older men have also reported suffering from gynecomastia after taking Invega or Risperdal.

Studies that look at Invega, and similar drugs such as Risperdal, have found that these drugs can cause breast growth in young men (known as gynecomastia).  This side effect was never disclosed to the public before the drug hit the market.  The result was that after millions of young men take the drug, a significant number of them experience this devastating reaction.  ADD/ADHD youth are not the only ones at risk; any male who has taken the drug is at risk of gynecomastia.

Gynecomastia happens in the majority of adolescent boys naturally. As the body changes and develops, many young men develop breasts. However, this development is small and does not last long enough for many adolescents to even notice it happening. Gynecomastia in patients taking Risperdal is a different story.

Risperdal works to block dopamine. As a result of the blocked dopamine, the pituitary gland releases more of the hormone prolactin than necessary. This hormone works to stimulate milk production and breast development, something seen primarily in mothers with newborns. In a teenage boy, however, the elevated prolactin levels are not something desired, and the result is the development of breasts.

As the patient continues to take Risperdal, and continues to experience the increased levels of prolactin, he will notice pain and tenderness in his breasts. As the disorder progresses the breasts will start to enlarge and can be accompanied by milky discharge. While the situation is benign, meaning other than uncomfortable it is not physically harmful, it can have lasting psychological effects on the young male due to shunning, teasing, and shaming.

The link between Risperdal and gynecomastia was first seen in a 1999 study published by the National Center for Biotechnology Information. This study showed that Risperdal taken with Prozac formed an especially high concentration of prolactin in the patients. 6 years later, a study published in the New England Journal of Medicine confirmed the findings. Since that time, more studies have come to the same conclusion, with some indication that the breast development can continue for up to two years after discontinuing the drug.

Those who suffer from gynecomastia after taking Invega are primarily young men.  These young men are going through puberty, and the hormones in their bodies are already changing rapidly.  Add to that mix new hormones spurred by the medication they are using, and they end up growing breasts.  Keep in mind it is not just young men that can experience this side effect, but any male taking the drug.  Symptoms of gynecomastia include:

Enlargement of Breasts – The primary symptom of gynecomastia is simply the enlargement of breasts.  However, this may not be as noticeable as one may think.  Some people gain weight while on these drugs, so the breast enlargement may appear to be weight gain.

Breast Tenderness – Gynecomastia is when the glandular tissue enlarges (unlike in females where the breasts are made of fatty tissue).  This causes the area to become tender to the tough and have a rubbery feel.

Asymmetrical Growth – While gynecomastia typically affects both sides of the body, both sides may not develop at the same time.  Often the breast growth is greater on one side of the body.

Nipple Discharge – As the condition progresses the male may start to lactate.  Galactorrhea, or nipple discharge, can occur.

Taking Invega causes the body to produce an excess of the hormone prolactin.  This hormone is responsible for breast growth in young women and milk production in new mothers.  However, when the excess hormone is found in men, the result is growing breasts just the same as it is in women.

In order to reverse the effects of gynecomastia, surgery is almost always required.  The breasts will not go away on their own, but rather need to be removed.

Galactorrhea is the sudden flow of milk from the breasts and is not associated with nursing. It is relatively common in women, and while inconvenient female breasts are designed to produce milk. While taking Risperal, many young men have reported that they not only grew breasts, but they started to produce milk.

Increased Prolactin Levels
As a young person goes through puberty, his or her body will experience a lot of hormonal changes.  For men this means that testosterone levels increase, for women estrogen and prolactin levels increase.  The prolactin helps with the development of breasts, and when a female has a child it helps stimulate lactation.  This is a good thing in females.

Young men taking Invega are subjected to increased prolactin levels.  The hormone, when found in higher concentrations than normal, has the same effect on men as it does on women.  That is: elevated prolactin levels cause men to grow breasts (a condition called gynecomastia), and if they stay elevated those men may begin to produce milk (a condition called galactorrhea).  When this happens, there is no way to reverse the breast growth without surgical intervention.  The young man must undergo breast reduction surgery, or a mastectomy, to have his body returned to normal.

Janssen Failed to Warn of Side Effects

Even after they were hit with a $2.2 billion fine, the company still did not include warnings about how Invega can lead to breast growth in males.  This has prompted a series of other Invega lawsuits.

When drugs are approved by the FDA, they are generally only approved for the treatment of one illness.  For instance, Risperdal was only approved to treat schizophrenia in adults for the first decade it was on the market.  This approval means that the drug manufacturer can only market the drug as a treatment for which it was approved.  When they try to market for something else, such as the treatment of bipolar disorder, or the treatment of ADD/ADHD in youth, they can be hit with criminal and civil charges.

Risperdal and Invega work remarkably well in children (they carry the risk of severe side effects though).  They also work quite well to help treat dementia, bipolar, and irritability in autistic children.  However, before the drugs were approved for anything other than use as a treatment for schizophrenia, J&J marketed them for off label uses.

Since the pharmaceutical industry is highly regulated, it was only a matter of time before they were caught.  These drug companies have a responsibility to make accurate statements about the drugs that they are marketing.  When they step outside these boundaries, the government takes those missteps very seriously: to the tune of $2.2 billion.  This amount is in various fines, penalties, and restitutions.  You can read all about the settlement on the Department of Justice page.

What Can an Invega Lawsuit Do?

The idea behind an Invega lawsuit is not to get back at the company.  It is not to stick it to them.  But it is to compensate those who have been hurt, and help pay their medical bills.  The only way to reverse the effects of gynecomastia is through breast reduction surgery.  This surgery will cost the patient money, and in the end he will have visible scars.  Every time he sees those scars it will bring back the memory of the shame he went through.  It is possible that he will need lifelong therapy.

A secondary effect of an Invega lawsuit is to raise awareness.  There are a lot of young men out there that have suffered from this side effect, but they don’t know it was caused by the drug that they took to help their thought processes.  Filing an Invega lawsuit can help them realize that they are not to blame, that the damage caused to their bodies and psyches is not because of something that they did.